On the 6th of August, 1913, Moritz Gomberg, aged 19, sailed for North America on the S.S. Tunisian, which departed from Liverpool, England. He declared Russia as the country of his birth, and his race as “Hebrew”. (Which may help to explain “Hebrewland” on the map he would publish in 1942, nearly thirty years later.)  An uncle in Odessa, Sheia Krakowsky, is identified as Moritz Gomberg’s nearest living relative or friend in Russia.

Moritz Gomberg’s last place of permanent residence before he emigrated to America, was London, England. Gomberg was unmarried, a jeweller by trade, intending to reside in Cleveland, Ohio.

Moritz was accompanied on the voyage by Boris Gomberg, aged 22, also a jeweller and unmarried, bound for the same destination, declaring the same country of origin, the same race, and the same Russian uncle. The rubber-stamp “ADMITTED” appears over the “Number on List” of each of the two Gomberg passengers to America on the “Manifest of Alien Passengers for the United States” aboard the S.S. Tunisian.

How do we know this is Maurice Gomberg
of “map” fame?

We know from author Douglas Reed in 1967 (The Battle for Rhodesia) and again in 1951 (Far and Wide) that Maurice Gomberg’s real given name is Moritz. The Constitutionalist of March, 1944 confirms it. Therefore, we need to look for Moritz in the passenger manifests, not Maurice. When Gomberg is naturalized in 1926, he will officially call himself Maurice.

In The Battle for Rhodesia, Douglas Reed recounts:

“… Mr. Moritz Gomberg was presumably unknown to the multitudes embroiled when in 1942 he popped up with a “Group for a New World Order” and published a map showing the rearrangement of the globe. He foresaw that at the war’s end the communist empire would extend from the Pacific to the Rhine (Berlin is not far from the Rhine), that a Hebrew State should be set up in Palestine (which happened), that the remnant of Western Europe should disappear in a “United States of Europe” (something which is now being actively pursued), and that the African continent should become a “Union of Republics” (it is becoming a shambles, the same thing).”

“What real purpose did Mr. Roosevelt promote through the way he used his imperial powers? He furthered the main principles of a plan for the redistribution of the earth published in 1942 (but clearly prepared much earlier) by a mysterious ‘Group for a New World Order‘, headed by a Mr. Moritz Gomberg. What this group proposed was startling at the time but proved farsighted. The main recommendations were that the Communist Empire should be extended from the Pacific to the Rhine, with China, Korea, Indo-China, Siam and Malaya in its orbit; and that a Hebrew State should be set up on the soil of ‘Palestine, Transjordan and the adjoining territories’. These two projects were largely realized. Canada and numerous ‘strategic islands’ were to pass to the United States. …”.

Thus, Douglas Reed, writing in 1951, clearly associates “Moritz” Gomberg with the plan of the Map.

The Constitutionalist of March 3rd, 1944, in Volume 15, Number 3, confirms the dual first name of the author of the now-famous “POST-WAR NEW WORLD ORDER MAP”, published in Philadelphia.

Says The Constitutionalist: “Maurice” is American for “Moritz”.

As far as we know, Mr. Gomberg only made one map, which does not qualify him as a professional cartographer.

In fact, Maurice Gomberg has been called a lawyer, a clock maker, a watch maker, a cartographer and a printer by various persons interested in his origins.

However, in an article written in Polish by Professor Aleksander Gella, entitled “Mapa Gomberga”, published in London, England in 1985 in a Polish journal edited by Gella for his own Veritas Foundation Publications, Professor Gella interviews former acquaintances of “Maurice” Gomberg, the author of the map. London, England, was Moritz Gomberg’s last place of permanent residence before he embarked for Liverpool to board the SS. Tunisian.

Gella conveys the recollections of some of Maurice Gomberg’s contemporaries, that Gomberg was originally a clock-maker, or a watch-maker, who sympathized with, but was not a member of, the Communist Party of America.

The title of the journal in which Gella’s information was published, translates to (“Polish Affairs in the World Perspective”). The original Polish is:  “Sprawy polskie w perspektywie światowej”.

In addition, there are naturalization records in Pennsylvania for a Maurice Gomberg who originates in Russia, and whose occupation is given as that of a “watch maker”. The date of birth on these records matches 1894, the year given on the passenger manifests of 1913 when Moritz Gomberg, the jeweller, set sail for North America.

As to the claim of the Shreveport, Los Angeles “Councillor” newspaper of 22nd October 1965 that Maurice Gomberg was a Philadelphia lawyer, the Philadelphia Bench and Bar for 1945, contains no word of any lawyer called Gomberg.

Back to our passengers. There is another Manifest, about the size of an index card, showing that Moritz and Boris Gomberg arrived at the Port of Quebec (a Province he will charitably merge into a North American Union on the map he draws in 1941) on the 15th of August, 1913 aboard the S.S. Tunisian.

Moritz’s Serial No. for the trip is 252-19-7. His C.I.V. number is 516. His place of birth is given as Odessa, in Russia; and his occupation, again, as that of a jeweller. On both manifests, Gomberg has declared that he can read and write.

This Manifest further reveals that Moritz’s passage to North America aboard the S.S. Tunisian was paid for by his “Brother”.

On the next line, “Destination, and name and complete address of relative or friend to join there”, the destination of Moritz is given as Cleveland Ohio, followed by the abbreviation “Bro:” (no doubt meaning “Brother”). The abbreviation immediately precedes the name Albert Gomberg, who may also be the “Brother” who paid for the passage.

Albert’s address in Cleveland Ohio, the destination of Moritz, is 3612 Scoville Avenue. These details are repeated on the second Manifest for Boris. Therefore, Albert Gomberg is declared to be the brother of Moritz and Boris, which, if true, makes Moritz and Boris also brothers.

The young Maurice is recorded on the second Manifest as also having declared that he had no money to show, and never had been arrested and deported, or excluded from admission to any country.

We also have a physical description of Maurice Gomberg on the second Manifest. Moritz was registered as 5 feet 6 inches tall, of medium complexion, with brown hair and brown eyes. Perhaps a bit self-consciously, the field for “Distinguishing marks” has been cancelled with a horizontal line; however, his medical status on the obverse of the same card states that Moritz has a “club foot”. The word “good” precedes this admission, on the previous line. It probably means his general health is good. (The word “good” appears alone on Boris’s manifest, who is 5’4″ and of “F-ai-r” complexion, with brown eyes and black hair.)

Given his club foot, there likely will be no military records for Maurice Gomberg in America. The obverse also records a couple more serial numbers, with dates and initials.

Moritz Gomberg’s place and date of admission on the second Manifest are given as Port of Quebec, on August 16th, 1913; and he entered at Buffalo, New York on the next day, the 17th of August. The Manifest is signed by W. Fischler.

Finally, there is a death certificate for a Maurice Gomberg who died in Philadelphia on March 22nd, 1958, and whose occupation was that of a watch maker. He was listed as age 64 (born in 1894), the same birth year “estimated” from the passenger records of 1913 when Moritz Gomberg was 19 years old at the time of his emigration. On his death certificate, his father’s name is given as Solomon, and his country of origin, Russia.

At the time of his death, Maurice Gomberg was living at Rittenhouse Court #4 at 1830 Manning Street in Philadelphia. There is a Stanley Gomberg on the death certificate as the “informant”, who lived at the same address, but no relation is given. 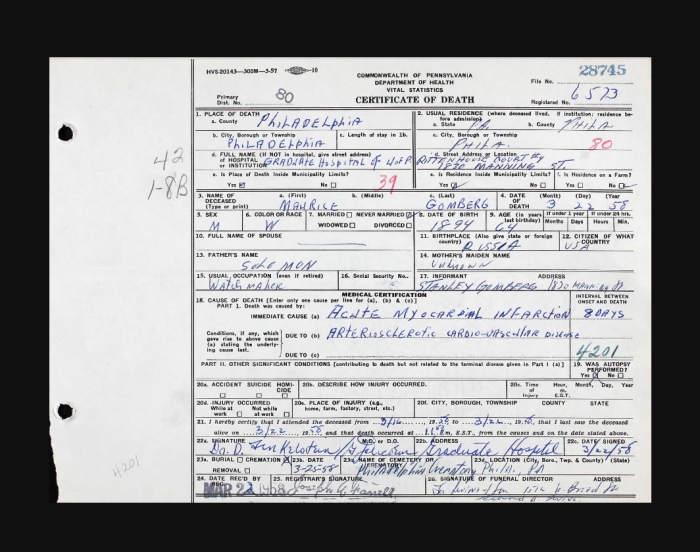 This is, indeed, the Maurice Gomberg of map fame.

Follow The Gomberg Map of World Union on WordPress.com

David Ben-Gurion predicts a World Government out of Israel (1962)